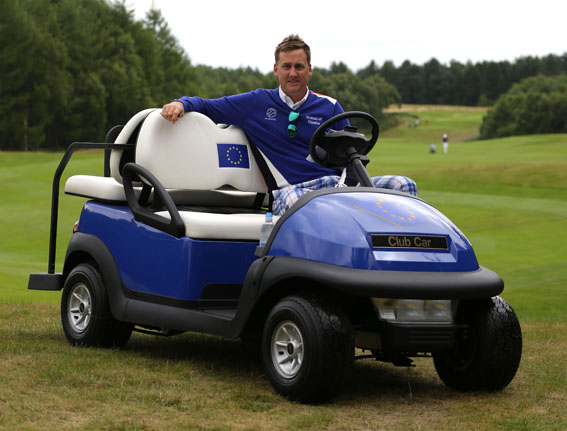 Bradshaw, UK supplier for Club Car, brought The Ryder Cup feel to the 2015 IJP Junior Invitational Day, which took place at Woburn Golf Club on July 27, by supplying one of the official vehicles supplied for The 2014 Ryder Cup, staged at Gleneagles, Scotland.

The Junior Invitational, gave 96 junior golfers from across the UK an opportunity to compete on the Marquess course, which is the venue for the 2015 British Masters supported by Sky Sports. They competed under championship conditions and received a variety of tips and practical advice from one of Europe's most successful Ryder Cup players. On the day, the golfers, all under 18 years of age on the 1st January 2015 and with a maximum 16 handicap to qualify, enjoyed a rare one-on-one experience with Ian Poulter, who used the car to tour the course and give hands-on professional guidance to each player, during a clinic in the afternoon with Ian. Ian, who has been the International Touring Pro at Woburn Golf Club since 2003, said: "Two of my key golfing passions are The Ryder Cup and providing junior golfing talent a platform to develop their skills and, thanks to Club Car and Bradshaw, I was able to combine the two once again at this year's Ian Poulter Invitational. "Opportunities like this weren't available to me when I was growing up and it's a privilege to share this day with youngsters that have a genuine enthusiasm and commitment to the sport and I'm always impressed by the standard of golf these girls and boys are playing." As Official Supplier to The 2014 Ryder Cup, Club Car, the world's largest manufacturer of electric golf cars, supplied its largest ever fleet for the biennial match, made up of more than 540 vehicles for a wide variety of users, from the captains of each team, to various support staff.